Koinonia Baptist Church is a Bible believing fellowship of Christ followers. Pastured by Rev. Richard Morgan we seek to be instrumental in bringing the whole Gospel of Christ to the world.

The church is lead by Pastor Richard Morgan and a team of deacons and trustees. 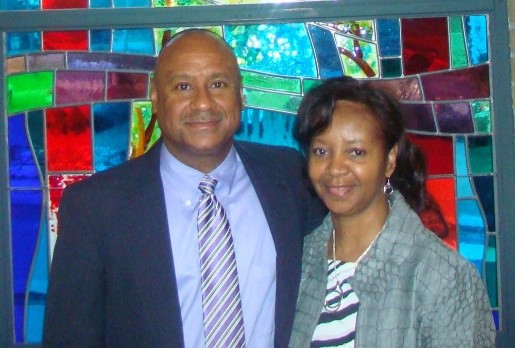 Richard and Ora Morgan have long been a part of the Koinonia Baptist Church family. In 2012 he took on the role of pastor.

The Story of our Journey

On Sunday, June 25, 1988, a fellowship group of 22 people requested Rev. Walter Bowie, Jr. to meet with them as a spiritual leader for prayer, counsel, and fellowship.  Because of the very spirit-filled meeting, the group decided that it desired to remain together for future prayer meetings and worship services.

Therefore, Rev. Bowie was asked to consider organizing the group into a church.  After much prayer, thought, and discussion, on Sunday, July 24, 1988, Koinonia Baptist Church was “born”.  “Koinonia”, a Greek word meaning Christian Fellowship, depicts the love, concern, and singleness of purpose exhibited in the early Christian church.  The name, Koinonia, was adopted because the intent was for the church to have a vision modeled after the New Testament Church — that vision being, to function as “The Servant Church in a Needy World.”  The church would focus on four characteristics that are were believed to be essential.

In addition to being focused on these four characteristics, Koinonia endeavored to encourage each member to find a specific ministry beyond the walls of the church.  Community outreach was seen as crucial in order for the congregation to advance the kingdom of God.

With the vision of Serving in a Needy World at the forefront of all planning, Koinonia began establishing missions/ministries from its inception. One of the first was “Operation Conquest.”  The outreach to the community began as a door-to-door mission of passing out gospel literature.  The church has continued to increase its missions involvement through the years and we support and contribute financially to several home and foreign ministries that are operated by others organizations.

Pastor Bowie was called home to be with the Lord on September 28, 2011, after which Rev. Richard Morgan was formally named as the interim Pastor of Koinonia on October 1, 2011.  Rev. Morgan was by no means a stranger to Koinonia.  He and his wife, Ora Morgan, had formerly been members of Koinonia.  It was while he was a member in 1990 that Rev. Morgan announced his call to the ministry and preached his first sermon.  Later in 2012, Rev. Morgan was officially “Welcomed Back Home” as the second pastor of Koinonia Baptist Church.

Continuing to embrace the church’s vision under Pastor Morgan’s leadership, Koinonia’s existing ministries have been enhanced and new ministries incorporated.  During his short tenure, his dedication to youth ministry has been clearly revealed by the addition of AWANA Clubs where children are trained to know, love and serve God.  To ensure that young people are able to attend the various activities, the church purchased a van to provide needed transportation

Koinonia was started in a prayer meeting and prayer continues to be the “hub” around which our church operates.  We emphasize an active prayer life, individually and collectively.  We subscribe wholeheartedly to the instruction of 1 Thessalonians 5:17 – “Pray without ceasing!”

The statement of faith does not exhaust the extent of our faith. The Holy Bible was written by men divinely inspired and is the record of God’s revelation of Himself to man. It is a perfect treasure of divine instruction. It has God for its author, salvation for its end, and truth, without any mixture of error, for its matter. The Bible, as the inspired and infallible Word of God, which is the final authority concerning truth, morality, and the proper conduct of mankind, shall be the sole and final source of all that we believe. We, therefore, acknowledge the Bible as our authority in matters of faith and practice.

We believe the Bible is the inspired Word of God, without any error, the all-sufficient authority in matters of faith, doctrine, and Christian living.

We believe in one God, eternally existing in three Persons: the Father, the Son, and the Holy Spirit.

We believe that man was created in the image of God but fell into sin and is therefore lost. Only through regeneration by the work of the Holy Spirit can man’s salvation and spiritual life be obtained.

We believe that eternal salvation is the free gift of God, entirely apart from man’s works, and is possessed by any and all who have faith in and receive Jesus Christ as their personal Lord and Savior.

We believe in the Virgin Birth of Jesus Christ, and that He is true God and man. He died on the cross for our sins. He rose bodily from the dead, ascended into heaven where He sits at the right hand of the Father and is now our High Priest and Advocate.

We believe in a regenerated church membership: that is, persons old enough to understand their need for Jesus Christ and, of their own free will, accepted Him as their personal Lord and Savior.

We believe that baptism is by immersion and the Lord’s Supper is a memorial to His suffering and death on the cross. These are ordinances to be observed by the church in its present age. These are, however, not to be regarded as means for man’s salvation.

We believe in the personal, bodily, imminent, and glorious return of the Lord Jesus Christ and that His Second Coming inspires believers for dynamic and zealous life and service for Him while waiting for His return.

“Join us so that you can learn to pray and grow in your faith as a Christian.”